Speech privacy is critical aspect of office acoustics, particularly as it relates to boardrooms and meeting rooms. Many office discussions are best conducted behind closed doors, but how can you know if an eavesdropper is able to listen to your discussions? To provide guidance on this acoustics engineering issue, ASTM International Standard E2638-10 defines five levels of speech privacy/security for enclosed meeting rooms and offices (see table). 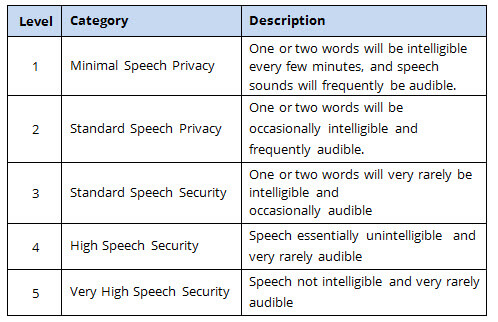 Two key factors determine the intelligibility and audibility of speech from a closed room: the sound attenuation provided by separating partitions and the background noise level at a potential listening point outside of the closed room. Sound attenuation refers to the degree by which sound is reduced from within a source room (e.g. a meeting room) to listening positions outside the room. Background noise, such as that provided by an HVAC system, can reduce the intelligibility/audibility of speech through sound masking.

Both of these factors, sound attenuation and background noise, must be carefully considered in the control of speech between adjacent office spaces. As an example, let’s consider a boardroom that is separated from an adjacent cellular office by a typical single-stud cavity wall (filled with batt insulation) with one layer of gypsum wallboard on either side. To minimize costs, this hypothetical wall has been installed up to a suspended T-Bar ceiling. The background noise environment within the office is controlled by the HVAC system. The noise level in the office is 35dBA (i.e. a quiet office). Under these conditions, a minimal level of speech privacy should be expected (Level 1).

We have two ways to increase the speech privacy between these spaces to Level 2. The first is to continue the wall to the underside of the ceiling (assuming there are no other sound attenuation weaknesses). The second is to increase the level of noise in the office space by using a sound masking system.

Many open offices employ a sound masking system for this purpose. The output of such systems must be carefully configured. Too low in volume, and the masking system may fail to provide sufficient masking. Too high, and there is a risk of increasing worker annoyance and lowering productivity. Generally speaking, background noise levels in an open office should not exceed 45dBA. In a cellular office, a 40dBA background noise level is more suitable.

To achieve a standard level of speech security (Level 3) in the above example, both the introduction of a sound masking system and building the wall from slab to slab would likely be required. Significant changes in wall construction would be required to achieve the higher speech security of Levels 4 and 5.

This example is a simplified case. In reality, there are many ways in which the sound attenuation of speech from an office to the potential listening positions outside the room can be compromised. These include window/wall junctions, penetrations through walls, interconnecting doors, and shared HVAC ducts between adjacent spaces. We call sound transmission via these indirect paths “flanking transmission”. With this in mind, the best time to address noise control is at the design stage of the office, when we can review the client’s privacy/security requirements and then work with the architect to develop partition assemblies and design junction details to control flanking transmission.